scite Email Alerts Just Got So Much Better

You asked, we listened.

We launched Smart Citation email alerts a few months ago to help our users stay on top of the scientific conversation: whenever a paper with an alert was referenced in a newer paper, we would send out a daily email digest to the user notifying them that the paper was cited.

So for example, you could set an alert on papers you published and claimed in scite, and be notified of new citation statements that referenced the findings in those papers as we indexed them.

Configuring an alert is as simple as clicking “Set alert” on a report page. In this example, the alert will notify you whenever we index new citation statements referencing the paper “Association between Amygdala Hyperactivity…”

It’s not quite real-time, but pretty close. And seeing how something was referenced was easy: you could just open the report page and read it, saving you the hassle of finding each new paper and scanning the whole thing to figure out what they said.

The emails from our initial version of this feature used to simply list out the paper that was referenced, and how many supporting, mentioning, and contrasting statements we detected. But, to actually see what was said, you had to click through and read them within our website.

Well, after trying it out for a few months, some of our users -- you know who you are! -- provided valuable feedback such as:

We thought that was perfectly sensible, so we revamped our alert emails accordingly. 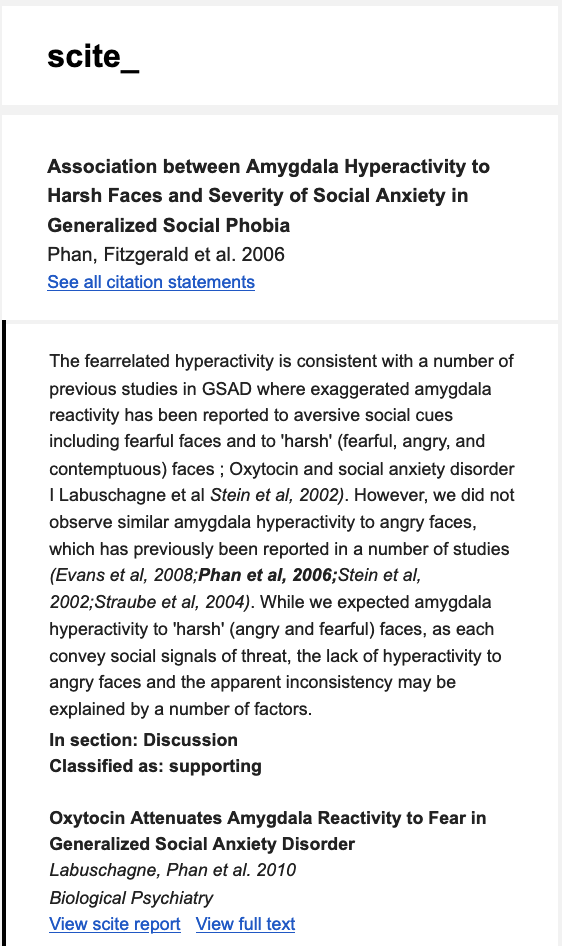 Our new and improved email designs show you which paper was referenced, what was said about it, and information about the new paper that referenced it.

We’re pretty excited about this change, especially because even though we relied on these email alerts internally and use them regularly, it took feedback from our users before we realized how much better they could be.

As always, if you have any feedback about scite, good or bad, please don’t hesitate to write to us -- we’re always listening.

Learn more about what alerts can do for you, or go ahead and try it out on papers you’ve claimed, your saved searches, or dashboards to be notified as new citations happen.